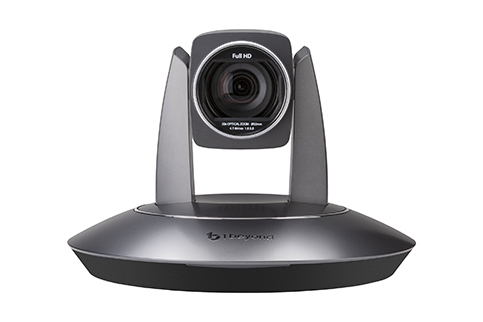 The IV‑CAMPTZ‑20‑SLVR‑1B is a high quality PTZ camera that can output up to 1080p60 resolution video via the 3G‑SDI or HDMI® ports. It is ideal for any meeting where one camera needs to capture several areas of the room. The IV‑CAMPTZ‑20‑SLVR‑1B camera supports a single Ethernet connection and provides power (PoE+), monitoring, control, and NDI®|HX video.

High Quality Video
A high quality Sony Exmor CMOS sensor enables the camera to output up to 1080p60 resolution video via the 3G‑SDI or HDMI ports.

Manual Control Options
Use VISCA over IP to control the camera with a Crestron® control system. 1B Cam Manager Software is included for easy configuration from a computer on the network.

Quiet, Fast Switching Between Presets
Up to 256 pan, tilt, and zoom combination presets can be configured. The camera will move to the selected preset point. A quiet, fast motor (120°/s pan speed) sets camera angles quickly.

Multicamera Capability with Automate Systems
Add the IV‑CAMPTZ‑20‑SLVR‑1B camera to an Automate multicamera system. Automate can be set to autoswitch between multiple 1 Beyond cameras to focus on the active speaking participant. Incorporate popular microphones and DSPs to switch between the presenter and audience.

Mounting Options
Standard mounting holes make it easy to mount the camera to a wall mount (included). Image flip allows the camera to be mounted inverted if needed.