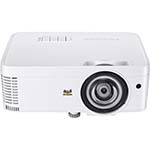 Viewsonic mpn:PS600X
We also sell accessories for your projector. 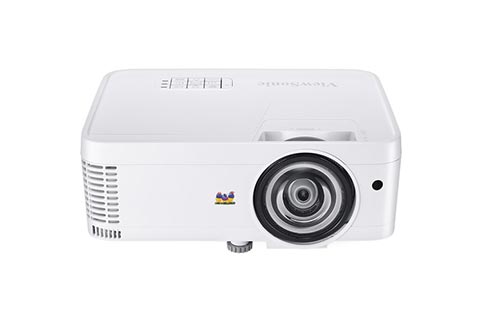 Enjoy bright images in most environments with the ViewSonic PS600X 3500-Lumen XGA Short-Throw DLP Projector. Its 3500 lumens of brightness can overcome ambient light in many situations, making it well-suited for presentation areas such as boardrooms and classrooms. The XGA 1024 x 768 native resolution is suitable for displaying most file and document types, as well as HD video. With its short 0.61:1 throw ratio, the projector can be placed very near your projection surface while still producing large images.

The PS600X has two HDMI inputs for connecting digital high-definition sources such as Blu-ray players and HD cable/satellite boxes, and two VGA inputs for analog sources. Its HDMI inputs are 3D-capable for viewing 3D Blu-ray discs with other compatible equipment, which is available separately. A VGA output allows daisy-chaining of multiple projectors or displays. The PS600X includes a VGA cable and an IR remote control for added convenience.

A short throw lens enables large images to be projected from short distances in small rooms. In addition, any blinding lights in front of the presenter, distracting shadows on the projected image, or glaring hotspots on the screen, are all eliminated because the projector’s light source is closer to the projection surface.

BRIGHT IMAGES IN ANY ENVIRONMENT

Packed with 3,500 lumens and a high contrast ratio, this projector produces bright images in nearly any environment.

Horizontal and vertical keystone correction and a corner adjustment feature eliminate crooked and distorted images for a perfectly proportioned picture every time.

An energy-saving SuperEco™ feature reduces power consumption and extends the lamp life by up to 15,000 hours.*

*Lamp life may vary based on actual usage and other factors.

When paired with the ViewSonic PJ-VTOUCH-10S interactive whiteboard module, this projector can transform into an interactive projection solution. Multiple users can simultaneously interact and collaborate at the screen by using their fingers or styluses.

* -- indicates specification not published by manufacturer.