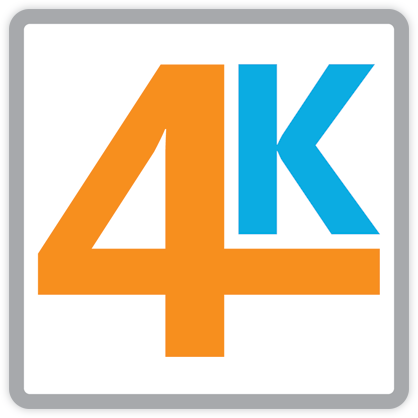 Click here to check out our selection of 4K projectors and screens.

Featuring a 4096 x 2160 resolution, these ultra-high definition projectors have 4x the number of pixels (or reproduce 4K resolutions) of 1080p projectors.

Their display is even smoother and more lifelike than the best HD projectors on the market today. Colors are more saturated. Frame rates higher.

We've seen 4K in action. The display is so good; it's like looking through a window. Probably better, depending on which window you're looking out.

Things to Consider With 4K

Two of the most important things to consider if you plan on savoring some sweet 4K content are:

The chart below provides a good visual explanation of why this is important.

Unless you're willing to sit with your face just a few feet away from the screen, you'll need a large screen (100"+) to truly appreciate resolution this high. For example, if you were to view 4K content on a measly 60" flat screen TV you would need to sit less than a body length away from the display to notice a difference (Mom would be so mad)! Of course, with a projector, we are not limited to such puny size screens.

Update (December 2017): Well, it looks as if things are moving along nicely! Sony just released a home theater 4K projector with a price tag that won't cause you to mortgage your home. Check out the Sony VPL-VW285ES projector with true 4k resolution, available now for less than $5,000!

More manufacturers have 4K projectors in the works, our sources say. Like any technology, it's just a matter of time before it becomes widely available and more affordable. We will keep an up-to-the-minute list of all our ultra high definition products on our 4K projectors page.

We are confident that 4K will revolutionize home theater. It may not yet be a viable or affordable technology for most consumers, but we think that's going to change in 2017.

We remember HD and 3D's growing pains. Heck, even today you can only get authentic native 1080p content from a Blu-ray disc, but it's still the most popular resolution on the home theater market today. Sadly, standard definition content is the default service package with most cable companies. It's going to talk a while, but we'll get there.

Ok, time to talk about (non-native) 4K, or faux-K, 4K enhancement, e-shift 4K or whatever other names the manufacturers will dream up.

As we mentioned in the previous section, TRUE 4K projection is very expensive for manufacturers to implement in projectors and still out of reach for most consumers. But thanks to some amazing engineering ingenuity, many projector manufacturers are acheiving 4K pixel resolutions through other methods — and unless you're comparing native 4K and faux 4K side by side, you'll be hard pressed to tell a difference.

4K enhancement, e-shift or pixel-shifting 4K is fairly easy to explain; imagine each pixel of a 1080p image lined up like soldiers on top of each other and in single-file rows. E-shift works by doubling that layer and then slightly shifting those overlaid pixels by a slight diagonal amount, in a stairstep fashion. Now those different images are alternated back and forth at 120Hz, which combined with some other crazy technological algorithms, resulting in images with four times the pixel density of the orginal content. Now each manufacturer may achieve this higher resolution in slightly different ways, but the results are all pretty remarkable, and drastically sharper than normal 1080p, when seen in person.

Obstacles to a 4K World

We asked some of our Facebook and Twitter friends what they wanted to know about 4K projectors. Here's a Q and A.

We have two words for those looking for 4K content: Good luck. (update: it's getting better!) Sony's new 4k digital media player comes pre-loaded with 10 movies and promises that more are on the way. There are also rumors that the Sony PS4 will serve as a 4K player and that Netflix is planning a 4K streaming service (update: what do you know? Both those things came true! Netflix's 4K service is only a couple of dollars more a month and the Xbox One S also comes with a built-in 4K blu-ray player.)

Lumens are lumens. They're measured by the projector's output and are not affected by image resolution. A 5,000 lumen XGA projector will be the same brightness as a 5,000-lumen 4K projector.

Update: probably. To view 4K content on these newer projectors, you'll need to make sure you're using an HDMI cable capable of supporting HDMI 2.0, and preferably one that supports HDMI 2.0a signals (for HDR content). If you're not sure if your cable will work, just give us a call and we'll help you figure it out.

The good news is, you can buy a 4K enhancement projector for under $3,000 right now. If you absolutely must have native 4K, the answer is 'we don't know, but we promise we'll keep you updated on all the latest developments.' Follow us on Facebook and Twitter, or sign up for our newsletter, for all the 4K updates.

No worries, we've got you covered. You can still get jaw-dropping HD images on a big screen with any of our top home theater projectors.

Stay up to date on 4K projector technology and releases

For the latest in 4K projector news, visit our blog»